Flight of the White Owl 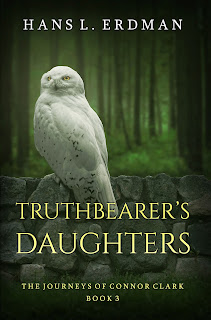 It was very early the following morning when Menta Kai was awakened by a gentle touch on her shoulder. Instinctively she reached for the sword that was never far from her side, but she felt a little pressure on her shoulder and looked up into the face of her sister Fiona. Fiona put her finger to her lips, and mind-spoke, “Could you come with me, please? We need to talk, and I’m hoping that you will understand and help and support me in this. I really don’t need the others to know, at least yet.” Menta Kai nodded, and replied, “Of course, Fi. Let me throw on a blouse and leggings, and I’ll be right there. You can wait if you want.” Fiona nodded nervously. Menta Kai pulled on her clothing, and the two of them slipped silently out of the room, but not enough to escape the attention of Arianna who had just returned from feeding her baby. Ari reached over to Talia in the next bed and shook her. When Talia looked at her, she held her finger to her lips and gestured for her friend to follow.
Menta Kai was thankful that Lona was not awake yet because she would definitely have wanted to go with her Lady Queen. She looked at Fiona quizzically. “All right, Fi, what’s the big secret? What’s going on?”
Fiona took a pensive look at the ground then met Menta Kai’s eyes. “You know that I love you, that I love your whole family, that being your sister and your parents’ daughter means the whole world to me, literally and figuratively. You know that, right?”
“You’re scaring me, Fiona.” Menta Kai gave her with a look verging on alarm. “You’re not going to betray us, or try and do that assassin thing, are you?” Her hand went to the hilt of her sword.
Fiona sighed. “No. I promised you I would never betray you in any way, Kailee. I just need to show you something, and I hope that you can accept it. If you can’t, I’ll understand, but I’m not going to lie to you. I’ll be devastated. I need you to run with me. We need to go for a run in the woods so that I can show you this.”
Menta Kai relaxed a bit. “Let me put this on my back so that I can run.” She shifted the sword around. They started with a light jog gradually picking up speed as they went along until they were both moving at a speed almost equal to a horse galloping. Fiona appeared to be running effortlessly and looked over at Menta Kai. Their long legs match stride for stride. “Watch, Kailee. I am going to jump.” With that, Fiona sprang into the trees, running from limb to limb across the canopy. With very little effort, Menta Kai was able to replicate the move across neighboring trees. Then, without warning, Fiona launched herself into the air, and the beautiful young Irish woman became a beautiful white owl. Menta Kai almost fell out of the tree in shock, and then reeled quickly as she saw two winged shapes fall in immediately behind the snowy owl. “Zara Zar, no! It’s okay!” Then she realized she was speaking in the common tongue. “Baw! Its okaui!” She simultaneously yelled and mind-spoke in Elvin. The two eagles broke off and circled back to their mistress, as the owl entered the trees again and all of a sudden Fiona was standing in front of her.
Menta Kai inhaled and exhaled a deep breath. “Next time you do anything like that Missy, you let me know what you’re going to do first. You almost became an eagle breakfast!” She looked at her sister. “Now, suppose you tell me what just happened?”
“Us too!” Arianna and Talia came up behind Menta Kai.

Read the entire story of Fiona Clark, the White Owl in "Truthbearer's Daughters" available on Amazon, and all other e-book platforms!

Posted by The Gewellyn Chronicles at 6:36 PM