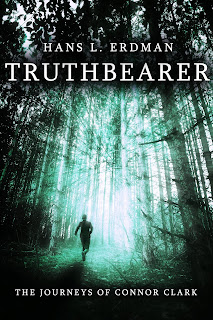 A shadow of evil covers the world, and Connor Clark has spoken out against that evil. When his wife is executed for refusing to renounce her faith, Connor escapes and enters a strange world of elves, wizards and the Deep Magic. A world not yet controlled by the dark magic of evil. A place called Gewellyn. Connor is given a quest. Together with Iolena, the beautiful banished Elven queen, and the rogue elf bounty hunter Menta Kai, he is to take the Truth of the coming evil to the Nine Worlds. But first, they have to save Gewellyn itself.
The newly revised edition of "Truthbearer" begins again the epic, award-winning Christian fantasy series, The Gewellyn Chronicles, and the story of the Truthbearer, the Most Beautiful Woman in the Nine Worlds, and the bounty hunter who is destined to become the greatest she-elf in history.

Exclusively on Amazon, read it for free on Kindle Unlimited

Welcome to the Gewellyn Chronicles, the stories of a world where good and evil still fight for supremacy. It is the story of a man, Connor Clark, an expelled elf queen, Iolena Yaleria, and an impetuous, often irrepressible rogue bounty hunter called Menta Kai. It is a story of love lost and found again, of faith, family, and friendship. The story of a man with the courage to speak the Truth in the face of persecution and oppression who pays a terrible price because of it. Rising from the ashes of unspeakable loss, Connor and Iolena will learn to love again, Menta Kai will learn to trust, and the three of them will embark on an adventure like none the worlds have ever seen. They have been called by the Creator to take the Truth to the Nine Worlds. Connor Clark is the Truthbearer.
When I first started writing Truthbearer, I had no idea that it was going to turn into a series of books. I created Iolena Yaleria after my wife was diagnosed with non-Hodgkin’s lymphoma; cancer. It was an escape from the uncertainty of her diagnosis. Then my wife went into remission and one story led to another. Dreams and visions became storylines. In addition to the three that you will meet in this book, a fourth daughter, Fiona, was added to the family with a marvelous backstory that became “The Adventures of Fiona Clark.” But I’m getting ahead of myself.
The saga of the Truthbearer, the chronicles of Gewellyn, the adventures of Fiona, and the amazing travels of Tessa Chart all begin with this story. Because I didn’t know that this was going to be the first book in a series, there were some inconsistencies and plot elements that don’t tie in with the subsequent books. Approaching the eve of the 2019 Realm Makers Christian fantasy writers conference, I decided to make some changes, so that the story now flows more evenly. On a suggestion from a publisher that I met at Realm Makers, the type font has changed and the print version will have several other updates.
My wife’s cancer remains in remission, and Connor, Iolena, and Menta Kai with their family and friends continue their adventures to take the Truth to the Nine Worlds. The evil is out there, and it is coming. It is like a roaring lion, seeking someone to devour. This is the truth that Connor Clark bears. This is the quest of the Truthbearer.

Posted by The Gewellyn Chronicles at 8:35 PM